You are here: Home / Blog / Milestones 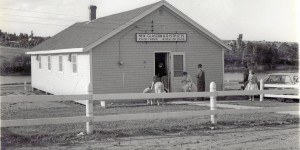 Today is a big day in NGLS history. On this day June 24, 57 years ago the first lobster supper was served in New Glasgow.  And we have so many people to thank for it. Back then it was served as a fundraiser for the New Glasgow and District Junior Farmers Organization. The members of the organization brought in food and served it in a very “country” atmosphere. The bare studs of the walls were showing, the tables were plywood doors which were laid flat on saw horses and the seats were long benches. AND there were NO bathrooms and NO kitchen!  My grandfather still remembers the first people waiting in their car for the steps to be put in place. The meal was simple  a cold lobster, home made rolls and potato salad as well as fresh desserts; followed by a dance. The money raised from that first meal paid for the building that they had purchased from the Covehead race track ( their old canteen) and moved to New Glasgow to be their meeting place. Since then the building has been expanded numerous times ( now including bathrooms and a kitchen too!)

The demand and local interest of the lobster supper grew as the years went on and The Junior Farmers provided lobster dinners on a regular basis to meet the public’s needs. In 1963, the decision was made to  make the dinner a weekly event, all of which was run by volunteers.

In 1970 the demand for the lobster dinner was so great that the organization decided to serve the public 7 days a week.  And in 1972- twelve of the founding Junior Farmers ( Willie & Thelma Nicholson, Sterling & Jean MacRae, Ralph & Wanda Dickieson, Robert & Edith Rackham, Leith & Phyllis Dickieson, Albert & Shirley Orr) purchased the ownership and turned the fundraiser into a successful business. 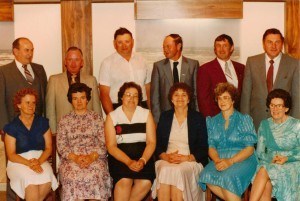 Business was booming and the question of enlarging the building entered the minds of the remaining owners, the following year (1973) an expansion was made that enabled the hall to seat up to 400 people.

The building was expanded again in 1975, and the first inland lobster pound on PEI was established using wooden tanks. The following year the wooden tanks were switched to fiberglass tanks. Being inland and lobsters requiring salt water, special accommodations had to be made. Water would be hauled from the nearby harbor and held in an underground tank that was refrigerated and circulated thought the fiberglass tanks, we still do this today!

In 1980, ownership decreased once again leaving only four owners to carry on the lobster suppers’ tradition. These owners were: William & Thelma Nicholson, Sterling & Jean MacRae, all of whom are still the owners today. That was 35 years ago this year, and today it is still run by The Nicholson & MacRae families.  Many people see it as an amazing accomplishment that the two families have work side by side for so many years but the way we see it, is that we are working with our family, and most of the time it just feels like a family reunion more than it does work!

And so today, we toast to our family, friends, partners & supporters. May the next 57 years bring just as much happiness to you as the last 57 has brought to us. Our doors are open because of those 36 Junior Farmers, but they reamin open because of you.  Many a person has made memories within the walls of our home away from home, including myself and I hope that many more will be made in the years to come.

Thank you again from our family to yours.