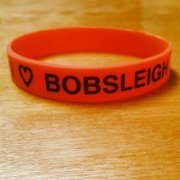 To show our support we are are carrying    ” I ♥ Bobsleigh”  bracelets in our gift-shop. Price is by donation, with a suggested minimum donation of $5.  All funds raised will help cover costs of team fees, training, travel, and equipment for her career on the National Bobsleigh team.