Lobsters have a long history on PEI and have become one of the most important industries on the Island. Everything from fishing to serving, numerous Islanders are dependent on lobsters for a living. The lobster was not always coveted as a delicacy. In fact, years ago, it was considered the poor man’s food and many children who were forced to take it to school as lunch were often teased and tried to hide it from other students. Many customers who come to our establishment have never experienced eating lobster or shellfish before and are unsure of what is edible. They will often quiz our staff with a variety of questions. Which parts are edible? How do they fish lobster? What to they eat? How are they kept? How old is market sized (1 pound) lobster? In my travels through the internet I discovered that there were already some great sites on lobsters and there biology… so why reinvent the wheel? One of the best sites to explain the basic biology of the lobster was found at The Lobster Conservancy from Maine. This is a VERY complete biology of the lobster. If you’re looking for just some brief information on the lobster and some of the interesting abnormalities of the lobster you might want to check out The Lobsterman’s Page. 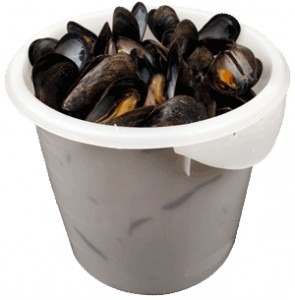 We also serve mussels, which are grown in nearby bays. During the season we will serve over 50,000 pounds of these delectable treats. This aquaculture industry has also become a huge part of the PEI economy, and tourists are also interested in these delectable critters. Discover Mussels has some great information on buying, storing and preparing mussels. Cultured mussels are PEI’s largest and most valuable aquaculture product. In 1996, total volume of aquaculture production reached 23.2 million pounds and mussels represents 75.8 percent of the total value. This is a far cry from a non-existent fishery in 1978.