During the summer season of 2011 – we were approached by the producers of a new show called “You Gotta Eat Here” on the Food Network.

The film crew visited with us for 2 days, and showcased the best of what we have to offer as well as a few laughs behind the scenes. The show aired June of 2012 on The Food Network and has been replayed numerous times. Since then You Gotta Eat here as produced a recipe book featuring the recipe for our famous hot and delicious home made rolls! We are looking to have the book available for sale in our gift shop in 2013. 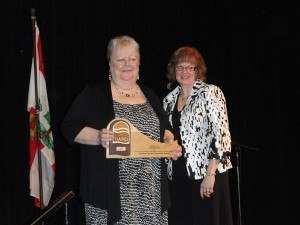 Also in 2012 we nominated long time employee and friend Joan Blanchard (otherwise known as Queen of the Pies) for the Tourism Industry of PEI’s Queens County Hospitality Award. This is awarded to an employee who has demonstrated outstanding hospitality and whose personal achievements have aided a particular establishment. We were thrilled when Joan was awarded with this honour. Joan has been working behind the scenes baking her delicious pies including the famous “mile high lemon meringue” with us since 1976 and has certainly earned the right to be recognized!